The next time an American visits horror upon his fellow citizens (how sad that we all know the wait is unlikely to be long and that my choice of pronoun is likely to be correct) and you hear someone offer the excuse, “There’s bad people on both sides,” point them to the ADL’s H.E.A.T. Map. It documents incidents of hate, extremism, anti-Semitism, and terrorism in the United States going back to 2002.

The following screenshots compare left-wing and right-wing extremist incidents and murders since 2008. 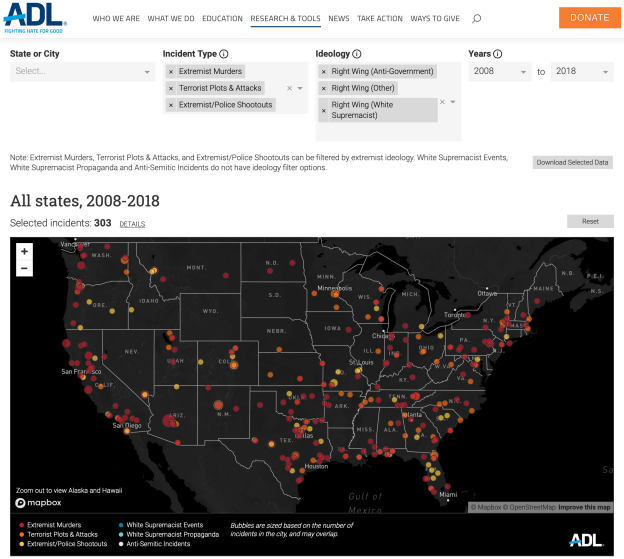 All such incidents are to be deplored, but we cannot pretend that there is any meaningful degree of real-world equivalence between left and right extremism. (And for every murder, shootout, or terrorist incident since 2008 there have been more than 14 anti-Semitic/white supremacist incidents.)

Those who subscribe to right-wing political ideas or support right-wing politicians who tacitly approve of or even provide quiet (or not so quiet) encouragement for the extremist ideas that today often circulate openly in right-wing circles would do well to examine why it is that the Republican platform has proven so attractive to so many who are willing to do unspeakably horrible things to their fellow citizens.

Allow yourself to be angry at today’s shooting, at this week’s mail bombs, at the demonization of desperate Central Americans seeking relief from poverty and violence, at the thousands of migrant children still locked up by our government, at the corruption of the current administration, at the chants of “Lock her up!”, at all the lies. Channel that anger toward action.

Raise your children not to fear diversity. Teach them that truth still has value.

Speak out against prejudice, hate, intolerance.

Be a light so others may see.